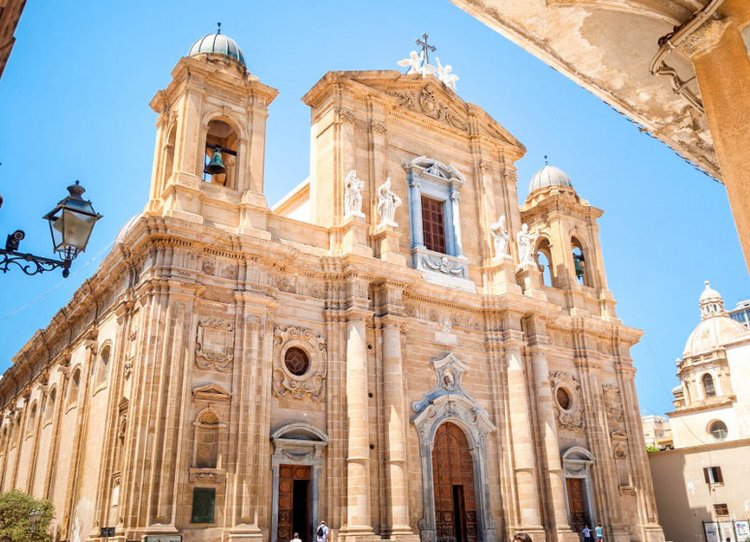 Marsala is the largest city in the province of Trapani, rich in history and culture. It stands on the ruins of an ancient Punic city and can be considered an open-air museum.

In the historic center, the Mother Church or Madrice of San Tommaso di Canterbury dominates Piazza della Repubblica, and is one of the many wonders to visit.

Palazzo Senatorio and Palazzo VII aprile are among the most beautiful buildings in the whole city.

In Marsala there is the historic Porta Garibaldi, the ancient access to the city, from where the Hero of the two worlds entered, after the landing of the Thousand.

The Tapestry Museum and the Archaeological Park are just two of the many wonders to be seen in this splendid location.

In the north western tip of Sicily, in front of Marsala, the so-called Stagnone Lagoon develops, a marine area of ??great beauty whose islands consist of an alternation of brackish marshes, salt marshes, freshwater pools, daffodils, spots always greens that create an enchanting natural scenery with a myriad of colors and breathtaking sunsets.

The Lagoon is closed to the west by the Long Island and to the east by the Sicilian coast, while in the center are the Island of San Pantaleo (home of the Phoenician colony of Mothia - Mozia) and the other two small islands of Santa Maria and Scuola .

Founded by the Phoenicians in the 8th century BC, Mothia was one of the most prosperous Phoenician colonies of the west, thanks to its geographical position close to Africa which made it a mandatory transit point for trade routes to Spain, Sardinia and the Central Italy.

In addition to the flourishing maritime activity, the economy was based on a substantial artistic and craft activity with a massive production of ceramic, terracotta pottery etc. Industrial production also had its weight starting from the processing and dyeing of fabrics, from the processing of metals such as silver, gold and iron.

Mothia was purchased at the beginning of the century by Giuseppe Whitaker, an archaeologist of English origin born and raised in Palermo. It was Whitaker who dedicated himself to the first archaeological excavations and the eponymous museum was dedicated to him, which houses numerous Phoenician finds from the archaeological excavations carried out in Mothia, Birgi and Lilibeo, objects recovered following agricultural work or from donations and purchases made on the antique market.

The museum also houses a splendid stone statuary group with two lions biting a bull, Greek and Punic polychrome glass paste vases and funerary stems. In the room with the skylight, there is the famous white marble statue of the so-called 'Giovinetto di Mothia', found in 1979 in the north-eastern sector of the island. The statue is 181 cm high and most likely comes from Asia.

Of great interest is also the Casa dei Mosaici, built after 397 BC, which houses several wells and ovens for working with ceramics.

The floors have fine decorations made with natural marine pebbles, representing scenes of animals in struggle, including lions, griffins etc. Outside the walls instead, you can admire the remains of the Casermetta with walls built with the typical frame structure.

On some walls there are still traces of the disastrous fire that destroyed it. Around the second half of the 6th century BC Mothia was equipped with a small marina, the so-called Cothon, which today the Mozies call 'La Salinella' because it houses a medieval salt pan.

An obligatory stop for those visiting Mothia is certainly the ancient Necropolis dated between the end of the 8th and the middle of the 6th century. BC, characterized by incineration tombs where various funeral objects were also found, consisting mainly of Phoenician pottery or imported from Greece.

Instead, they are from the second half of the 6th century. B.C. the twelve sarcophagi near the North Gate and the others scattered in various points of the coast for about half a kilometer.

Mothia was connected, through a submerged road, to another necropolis, that of Birgi. While today the island can only be reached by sea, in ancient times there was a road, today visible only when there is low tide, which from Porta Nord reached the necropolis of Birgi.